Every change professional and business leader has experienced resistance to change, though they may not recognize it as such or call it by that name. Countless models and frameworks have been developed to mitigate what Cornell University’s Shaul Oreg defined as the ‘individual’s tendency to resist and avoid making changes, to devalue change generally, and to find change aversive across diverse context and types of change’. However, over the years, what I have learnt is that the most effective way to alleviate, or at least mitigate resistance within a project, is to engage a seasoned Change Manager.

Why do people resist change?

Let’s start by briefly addressing the obvious questions – what is resistance and why is it such a challenge in the world of organizational change? The study into resistance has a much wider context than the purely organizational, and experts believe it is fundamentally a psychological response with cultural and sociological roots. Human beings have a strong instinct to protect established social relations because we are social animals and survive best in groups. People also tend to be resistant when the change is not in their best interest or is out of step with their beliefs or values.

Therefore, it is unsurprising that organizational change triggers similar responses, with fear of the unknown and a strong preference for the status quo, translating into headaches for change practitioners. For example, if a firm decides to invest in a new finance and accounting system, the team members who use the current system may fear having to learn how to navigate a new application, which may have a knock-on effect on the team’s well-established processes and procedures. People might lose their status as recognized subject matter experts and may even fear losing their jobs if this new-fangled system is faster or automates activity.

Before we look at some solutions, it is worth pointing out that not everyone objects to change - some people actively seek out opportunities to do different things or just do things differently. Equally, it would be simplistic to say that people either embrace or resist change because it elicits a spectrum of responses. There are four main factors which influence peoples’ likely reaction to organizational change – the size or magnitude of change, the timing of it, the significance of its downstream impact and the wider organizational context. These are useful criteria for helping change professionals to estimate or gauge the likely extent of resistance.

Change Managers to the rescue

There are many Project and Programme Managers with an encyclopedic knowledge of the tools, frameworks and models that have been developed over the years to manage resistance. However, whilst this knowledge is useful, I believe this is an area of change delivery where Change Managers reign supreme.

The Change Manager’s superpower is to work closely with impacted stakeholders to embed the change and drive the adoption of the new ways of working. If the project deliverable is not fully adopted, the project cannot be successful, and the organization will not realize the expected benefit. As Change Managers focus on the human aspects of change, they are best placed to maximize adoption and are therefore critical to making projects successful.

Resistance is often one of the key blockers to adoption and Change Managers can develop a plan to drive adoption via a series of non-linear activities. 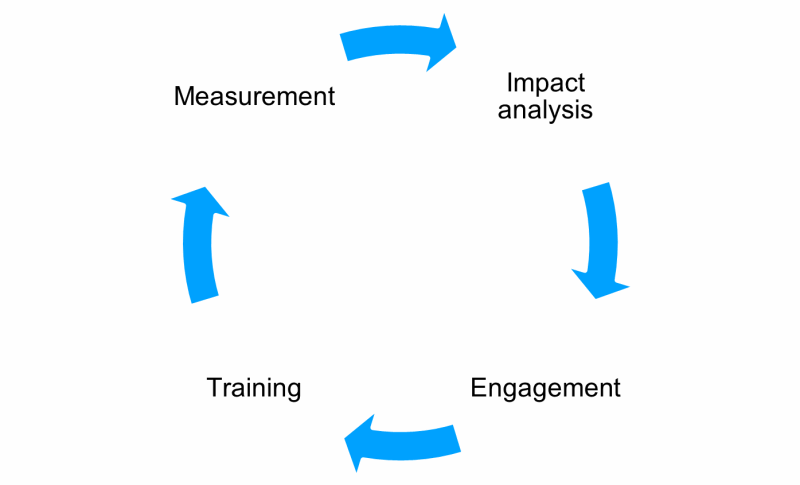 An impact analysis is about understanding who is impacted by the change, how and to what extent. Some general examples of how people can be impacted are work location, team structure, systems, processes, tools and sometimes the very job they perform or how much they are paid. An impact analysis can be structured by team or function and documents all the possible ways in which individual end users will be impacted by the change. The result may be a long list with two columns – the type of impact running down the left and team members’ names on the right. It needs to be as granular as possible for resistance mitigation to be effective. If the analysis is only conducted at the team level, too much individual nuance will be lost.

Let’s return to the new finance system from earlier. Often, when technology teams are working with third-party vendors to design a new system, they collect and interpret requirements from the business about what features and functionality are needed. However, they don’t spend enough (or sometimes, any) time talking to all end users about the impact the application will have on their working lives. By talking to end users, we can surface many issues, objections or challenges that are missed but are a critical success factor in the adoption of change.

An impact analysis often runs parallel with Engagement, simply because it is very difficult to gauge the impact of change on people’s ways of working without engaging with them. Equally, early engagement helps Change Managers to build relationships at the beginning of the project lifecycle. However, it is helpful to at least draft a skeleton impact analysis before speaking to stakeholders because the drafting process may generate some helpful initial insights or early red flags around some of the more difficult stakeholders’ conversations on the horizon.

This is arguably the most important area of a Change Manager’s role. Spending time with the stakeholders impacted by the change is so critical for adoption. This is how Change Managers can influence end users by building the desire to change, shaping the behaviours, help them understand ‘what’s in it for me’ (known as the WIFM!).

In our Finance team, Bob is a super-user of the existing system and has been using it for 12 years. He was part of the team that introduced the system and he feels personally tied to it. A lot of his expertise and recognition comes from his deep knowledge of the system and he may even feel that its replacement is an indirect criticism of his tool of choice 12 years ago. Mary has only joined the organization in the last year and has spent much of that time learning how to use the existing system and how to follow the related business processes. She really doesn’t want to re-train on another system so soon. Therefore, it is logical that they will be resistant to switching to a new system, however, they are both probably very high interest and medium power in the stakeholder matrix.

This context will help the Change Manager to devise a suitable approach to help them both come to terms with the change, be less resistant to it and maybe even embrace it.

If a change is poorly communicated it may appear secretive and therefore engenders fear and suspicion. Equally, fear of change often stems from simply not knowing something. It is therefore critical for the Change Manager to harness end-user feedback to develop a plan to address these elements and start to chip away at resistance.

For our Finance team, user training is a key component of getting people comfortable with the new application. However, training can take many forms and does not need to focus on traditional classroom-based activities. There are lots of ways to upskill, such as guided ‘how to’ videos or online learning. Better still, if end users have been involved in the requirements gathering, they will be asked to participate in user acceptance testing (UAT) before the system goes live. Although some functionality will change as a result of the UAT, it is a wonderful opportunity for users to train on the new user interface and the general ‘look and feel’.

Awareness is heavily linked to communication but gone are the days of emailing teams a bland project update. The experienced Change Manager shares information through multiple channels such as animated short videos, messages on office TV screens, desk drops or posters. They can use different ‘personae’ to build empathy with different user types and bring it to life in a completely bespoke way.

A more mature organization may have something called a Change Agent Network – a group of employees who advocate for change on an ongoing basis. They influence their colleagues and peers all the time on the benefits of change and if a Change Manager is fortunate enough to have access to a group like this then it is a huge asset.

Finally, how do we know if we are successful? The goal is maximum adoption so success can be measured by tracking and monitoring the usage levels of our new Finance application. A good Change Manager will have agreed on the metrics and acceptance criteria with the Project Manager at the start, for example, time spent logged in to the system and the level of system knowledge. Ongoing measurement of this post-go-live is a great way to assess gaps, which can be addressed perhaps with further training.

This leads to a frequent topic of conversation in change circles – how long post-go-live, and subsequently project closure, should a Change Manager remain involved? This depends on the nature of the change, the maturity of the organization and the overall levels of resistance met along the way. Often a three-month period is sufficient, but the main challenge is helping the project sponsor and other senior leaders understand that this is a requirement at all. It is very easy to dismiss this ongoing involvement as an unnecessary expenditure and a distraction from moving to the next project.

There is an old saying – “don’t spoil the ship for a ha’peth of tar” – which sums this scenario up for me. Why invest millions on a fancy new system and the project structure to deliver it only to stand down the Change Manager too soon and risk people back-sliding into old ways of working? Let them release their superpowers – you won’t be disappointed with the result.

How to Manage Change During a Crisis