One of the key questions marketers are struggling with is the impact of the digital age on consumers and – consequently – on their role as a marketer. Or more simply put: what is still working today and isn’t? What do consumers like to hear or read about?

Ever since the early sixties, the insight that a product needs to offer a 'unique selling proposition' (USP), which the competition finds it difficult to claim or reproduce, was put forward. However, as the years passed, the number of products and services - and their copies - has put the ability of brands to distinguish themselves under increasing pressure, particularly in mature markets. Consumers, who were often not in the mood or capacity to rationally evaluate all different brands propositions, started increasingly buying products because they ‘felt’ comfortable doing so. Because they liked the product, its philosophy or identity. This phenomenon - the power of the consumer's emotional bond with a product - is known as theemotional selling proposition (ESP).

And what about today? Where should your advertisements focus on? Recent academic research reveals how known brands reap the biggest rewards from informative messages with USP's. The consumer is already familiar with the brand and consequently has more room for the processing of other information on the new product. Just as USP's work better for (the extensions of) known brands, so ESP's are more appropriate for new (and as yet) unknown brands. Positive emotions act as an aid to memory, so that brand names 'stick' more easily in the consumer's mind.

A similar reasoning counts for the distinction low vs. high involvement products. When considering buying a high involvement product, people will be willing to spend more attention and effort in processing the informational message or USP. Non-involved consumers lose attention more quickly, which means that the brand and/or its USP fail to stick in their memory. They will be better able to remember the low involvement brand if they are targeted with an emotional message.

The re-launching of the Apple brand around the turn of the century is a good example of this phenomenon. By the middle of the 1990s Apple had almost reached the end of the road. To re-focus the attention of consumers on the Apple brand, in 1997 CEO Steve Jobs commissioned the highly emotional 'Think Different' campaign. This campaign succeeded brilliantly in making the brand known - and loved – again. However, more recently, for the iPhone and iPad campaigns, the company opted for a highly informational approach, with an emphasis on the USP's of the new products.

Brands are increasingly aiming to promote higher social ideals in their campaigns as well. They adhere to a set of higher ethical standards and encourage their customers to behave socially and responsibly. By doing so, brands are building a conscience.  By following a strategy of ‘a noble purpose’, a corresponding social commitment is reflected in the product that is marketed. Social responsibility is not a mere ‘corporate’ affair, but should be fully integrated in the consumer promise of the brand.

Having said all this, there is an increasing tendency for advertisers to try and get the best of both worlds, a phenomenon called the integrated selling proposition. For example, the clothing retailer H&M repeatedly makes advertisements that combine a mix of emotional messages (glamorous models in hip clothes) and informative details (prices are always mentioned). But H&M also invested heavily in its societal performance. 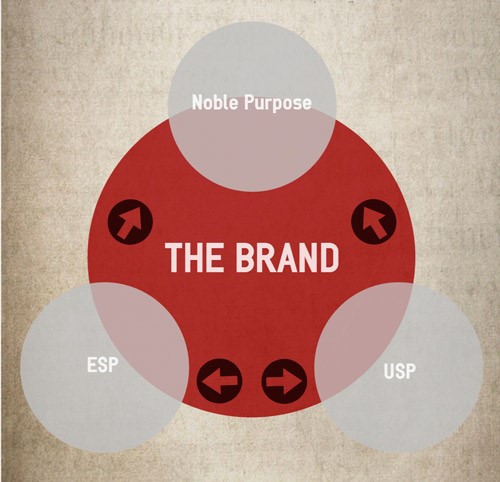 Even launching the Consciousness sub-brand. Or take the example of Ben & Jerry’s (owned by Unilever) who focuses on the quality and origin of their ingredients (USP) but put all this in a somewhat dreamy fantasy world (ESP). They even add a third level to their communication, having their range of products fully ‘fair trade’ certificated, the so-called the noble purpose. They want to 'improve' the lives of consumers, by means of integrating  USP,  ESP and ‘noble purpose’.

Today, strong brands work concurrently with this strategic ‘brand trinity’. A strong brand communicates using both informative and emotional messages, but also appeals to higher ideals (‘noble purpose’) in order to convince consumers and strengthen the relationship. A balanced mix of messages leads to better results and profitability.