UberEATS and the campaign that went wrong

UberEATS and the campaign that went wrong

In many ways, social media is a gift: it brings people together, helps friends stay in touch and businesses to engage with their customers. But how effective is social media really as a platform for campaigns?

A few years ago Waitrose ran a social media campaign called “I shop at Waitrose because…” where they invited their Facebook and Twitter friends to finish the sentence. Waitrose is a well-loved British brand and one that its customers feel a certain affinity towards, but when you offer an opportunity to an almost infinite number of people to finish such a sentence, you are, in hindsight, asking for trouble. One particular example (and a personal favourite of mine) being “I shop at Waitrose because…I HATE POOR PEOPLE”.

It seems, however, that Waitrose is not the only one to have misaligned a social media campaign in this way, with the most recent example from UberEATS…

To celebrate a new partnership with Krispy Kreme, UberEATS launched a London-based campaign yesterday where they offered a dozen free doughnuts to anyone who downloaded the app and ordered between 2pm and 6pm (with a total of 36,000 doughnuts to give away). However, with a population of approx. 9,000,000 in London (and pretty much every one of those with a smartphone to hand), that is a big opportunity to disappoint a lot of customers…

So, 2pm came around, the promotion goes live, and everyone who has downloaded the app quickly places an order to claim their free doughnuts… and the app crashes. And crashes again. And again. Until it becomes permanently offline.

Naturally in today’s ‘social age’, customers took to Twitter to post about their dissatisfaction and disappointment with the service, with users posting all sorts of topical jokes, such as ‘Dave marked himself safe in the donut crisis’ and ‘14th November will forever be known as the donut apocalypse’, to name but a few – not to mention the spawning of animated GIFs.

Rather like the Waitrose campaign of a few years back, with hindsight, perhaps this should have been foreseen. With 36,000 doughnuts to give away (which is in fact only 3,000 boxes) what did they think was going to happen?

Although running smart advertising campaigns can be very entertaining, and running smart direct marketing campaigns can be extremely innovative, running campaigns solely on social media often comes with a lot of risk. In an environment with literally hundreds of millions of participants, there are bound to be some people who can pick holes in your thinking, or in this case, stress-test your app way beyond breaking point.

Oh, and the icing on the cake, or rather, the icing on the doughnut, was that they chose to run the campaign on World Diabetes Day – another reason why planning, and risk monitoring, is crucial.

About the author: Adam Gray is a social media expert and co-founder of Digital Leadership Associates - the largest social media management consultancy - with Tim Hughes, author of the Kogan Page book Social Selling.

Social Selling by Tim Hughes and Matt Reynolds is now available. Save 20% with code BMKSS20 when you purchase the book from Kogan Page. 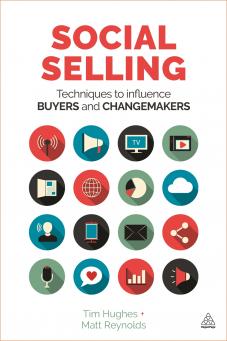 What is B2B Social Selling?

Why Your Sales and Marketing Strategy is Failing