What Makes a Disruptive Market Competitor?

Competitive disruption is about changing markets and altering their established rules of competition. While competitive disruption is relentless in the current century and decade, the idea of disruptive competition is not a new one. Joseph Schumpeter, a twentieth century Austrian-American economist and political scientist and latterly a Professor at Harvard, popularised the term ‘Creative Destruction’ in 1942. He used it to describe the constant change in markets which he described as mutation – a biological and evolutionary term. He observed that it is the essence of capitalism and “what every capitalist concern has got to live in”. His emphasis was on new technologies, new commodities, new sources of supply and competing through quality rather than price.

“Clearing the undergrowth” through innovation

Schumpeter approached the issue from a somewhat left wing political outlook that was concerned that the pace of change would lead to vortex of economic self-destruction through unfettered capitalism. In contrast, and some seventy five years on, it is clear that the impact of innovation and disruption has almost always been backfilled by the reallocation of assets and resources to the benefit of economies as a whole. Innovation is like ‘clearing the undergrowth’ to release new energy and expansion.

Innovation is indeed alive and well; filings for patents, which can be taken as an indicator of innovation, grew in 2013 by more than 9%, resuming their pre-recession levels, and much faster than global economic growth.

But disruption is not just about technological step changes, as Schumpeter dreaded. It can also be about the business operations model itself and how that delivers exceptional value for customers.

Examples abound where companies have changed their markets. In the grocery retail sector the success of Aldi (and also Lidl) is a case in point. Aldi now holds just 5% of the UK market, yet it is dictating prices to the entire market, leading to massive write downs by the major supermarket chains. And it is returning 5% net profit before tax: way above the current average for the major chains with much higher market shares.

Regardless of whether the disruption is assisted by technology or simply just about the way disruptors operate, the essence of success is that customers receive value they find to be compelling and which in turn drives growth and net margin for the provider.

Our research has identified that so-called technological disruptors such as Amazon and Uber achieve their success by delivering astonishing value for customers which, in turn, is achieved by stringing together several attributes of the technologies to create distinctive customer value: hopefully and eventually at a margin that gives real returns on the capital invested.

It is the stringing together of the attributes to create a unique competitive combination that makes disruptors. People often get excited by the idea of disruptive technologies but the reality is that it is the application of technologies that builds market place disruption when customers value the difference.

The fact that the relatively mundane business of supermarket retailing can be disrupted by the likes of Aldi, reinforces this point of view. There is no aspect of technology that plays a role in the burgeoning success of that business. It uses the same point of sale systems, similar production lines at its suppliers, and its trucks and warehouses are broadly similar. Key points of difference in its business operations models are the reduction in complexity through its small and focused range combined with the almost exclusive use of own label suppliers where there are no concealed marketing premiums. This reduction in the cost of complexity enables prices that are as much as 30% less than the market for broadly equivalent quality. It has strung together a new formula from established building blocks.

The low cost airline business is another example. Southwest Airlines in the USA has not only delivered amazing value to customers (price and service) sustainably since the 80’s, it has outperformed the S&P 500 by a factor of 6. It has done this using the same planes, runways, fuel, air-traffic systems, crew factors and safety requirements as the big brand airlines. Easyjet and Ryanair have done the same in Europe and also created astonishing shareholder value. Once again the distinctive features of their business operations models are about how complexity has been eliminated to drive up asset utilisation; how costly channels to market have been disintermediated and how the customers’ own time has been leveraged to reduce costs.

One of the key learnings from our research is that the attributes of disruption are about how you operate and what you chose to do and not do. Indeed this is clearly a strategy in its own right; as the diagram shows it is smart to begin to think about how the configuration of your business operations model can challenge conventional market driven thinking. 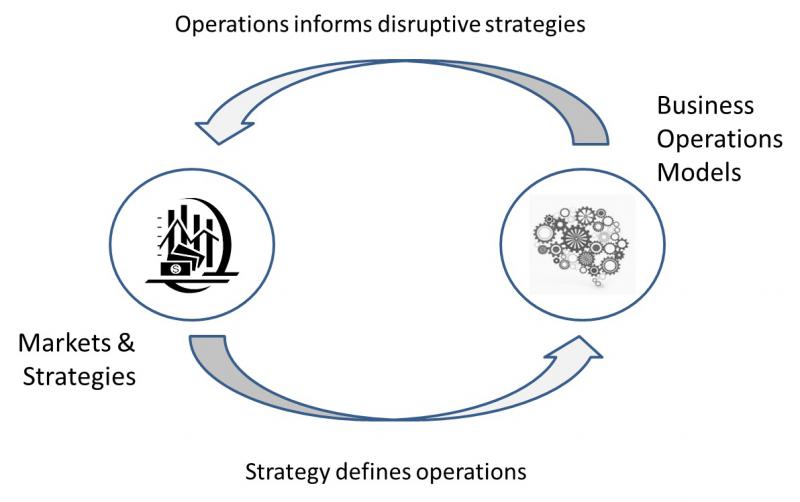 Business Operations Models – becoming a disruptive competitor looks in detail at what it takes to be a market disruptor. A key conclusion is that business operations can inform strategy rather than just implementing the top down perceived wisdom of market structures and their dynamics. Every case points to the maxim “don’t follow the conventional wisdom, find a way to change it – radically”. The building blocks invariably exist; it is about building new castles with them.