Why Most Copywriting Fails To Achieve Its Objectives 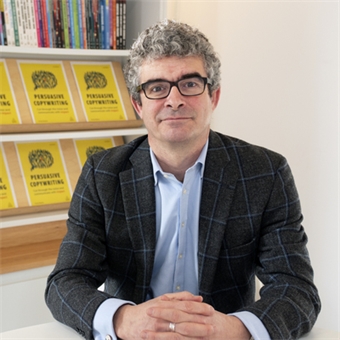 Copywriting expert Andy Maslen explains that good copywriters, among other things, discard what they learned in school and employ empathy.

Most, if not all, copywriters do not have any formal, long-term, structured training in copywriting. That is simple to explain: there IS no formal, long-term, structured training to become a copywriter! It does not exist on university syllabuses (thank Heaven); there are no Guilds or Royal Colleges (again, thank Heaven). Despite the fervently held desires of many a writer-for-hire, it is not a profession, but a trade. And an unregulated trade at that. Most of us pick it up on the job, augment our skills through reading, attend the occasional training course and hope for the best.

This is not to say that copywriters do not have any formal, long-term, structured  training. They are trained – or taught – to write. Throughout our childhood, adolescence and young adulthood, we are taught to write. By mainly skillful, well-meaning teachers. And here are some of the things they teach us: long words are better than short words. Long sentences are better than short sentences. Lots of punctuation is better than a little. The rules of Latin grammar are an excellent framework for English composition. Paragraphs should continue until you have finished a complete thought.

Particularly in further and higher education, we are taught that the way to present an argument is to amass and then lay out logical reasons. We are taught to avoid personal language – I think … you can see that... – in favour of a neutral, dispassionate tone of voice that places facts front and centre. And, for the teachers, lecturers, tutors and professors who are paid to read what we have written, this is enough.

This emphasis on logic is fine in the wooded groves of academe. It sits well with other disciplines such as economics. Classical economics and its adherents have always claimed that with perfect information comes perfect decision-making. That human beings, when in possession of all the facts, make logic-based decisions through a calm and rational analysis of the risks and benefits of each competing option. Aah, sweet!

Recently, faced with the disconcerting evidence of their own eyes, (and possibly behaviour), economists have started to wonder why it is that human beings, when in possession of … etc. etc., don’t make rational decisions. Why do people smoke? Drink to excess? Have affairs? Break the speed limit? Eat fatty foods? Vote for fascists? To accommodate the evidence, classical economics has spawned an untidy, mutant offspring called behavioural economics. Behavioural economics is a fancy term for “psychology”. Itself a fancy term for “why do people do such crazy stuff all the time?”

After much head-scratching, experimentation, “modeling” and other pseudo-scientific thumb-twiddling, here’s what they have come up with. Ready? Sometimes people do stuff that’s bad for them because it feels good. Ta daa! (And that, gentle reader, is why you should never let your children study economics at university.)

But back to the power of logic. Of accurate description. Of reason.

This focus serves another trade remarkably well: journalism. And because journalism has the written word as its stock-in-trade – but not, or not usually, the income that a smart copywriter can command – many journalists jump the fence and set up as copywriters. As they do, they bring with them an idea that what matters is one’s ability todescribe things.

Now, it’s true that descriptive powers do no harm in the hands of a skilled copywriter. In fact, they are one of the abilities that we should cultivate. But they are secondary to the real, scratch-the-surface-and-you-find-it skill that defines the advanced copywriter.

There is a second group of entrants to the copywriting game who do possess the ability to empathise. They are interested in what their interlocutor is feeling, more than what they are thinking, or saying. And they are skilled at paying attention to the cues that suggest a person is saying one thing but feeling another. Those people are sales people. They may have a classical sales background: in door-to-door selling, like David Ogilvy; in mail-order selling, like Drayton Bird; in face-to-face selling on shop floors, car showrooms or Tupperware parties; or in telephone sales.

They may have a direct marketing background, like mine, where every day we would open the post and count order forms returned to us by customers. Or they may have a broader marketing or commercial background where, nonetheless, they were judged on their ability to affect the P&L of the company that employed them.

This second group is the one to watch. Having switched to the copywriting trade, they are less interested in advancing a coherent, logical argument than in arousing feelings in the breast of their reader. Three of their best friends are FUD (fear, uncertainty and doubt), FAG (fear and greed) and FOMO (fear of missing out).

Hmm. Fear seems remarkably popular. Why is that?

Well, it all started a long, long time ago. I want to introduce you to somebody who can help us understand why copywriters need to respect the power of fear. He can also help us to understand why people do irrational things. His name is Ug.

Ug lived 200,000 years ago. He lived with his wife and children in a small tribe of early Homo sapiens in a … well, in a cave of course. Ug had a hard life beset by problems. Here are the two things that bothered Ug the most.

One, getting food to eat without dying from it. Two, avoiding being eaten by something big and fierce.

One day, Ug was sharpening his spear-point by the fire when he saw his children Little Ug and Little Ug (What? You were expecting Lily and Tristan? ) wandering off to play in a patch of red berry bushes.

“Hey!” called Ug. “You see those red berries over there?"

“Last week, Little Og ate some of those and guess what happened to her?”

“She turned green and fell down dead. Anyhoo, have fun, kids!”

Unbeknownst to Ug or Little Ug or Little Ug, the week before, an almost identical scene had played out on this very spot, between Mummy Og and Little Og. Here’s how that went.

“Hey!” called Og. “Statistical and anecdotal evidence suggests that ingesting those red berries over there will lead to an early and painful demise. Here is an infographic charting child mortality and red berry-eating that makes the point rather well.”

“So, don’t forget not to eat the berries.”

Storytelling, it turned out, and story listening, conferred evolutionary advantage. Which meant that, as the human race advanced haltingly towards the present day, our brains evolved to respond to stories. To the point where your brain, and mine, releases dopamine when we listen to stories.

Dopamine is a natural pleasure drug secreted by the brain. It is not, as far as I am aware, secreted when we listen to a PowerPoint presentation.

The part of the brain where stories work their magic is called the limbic system: it’s a collection of discrete but linked structures buried deep inside the brain just on top of the spinal cord and brain stem. It is a very primitive part of the brain, often referred to as the Lizard Brain (by popular science authors) or the Palaeomammalian Brain (by clever, real science authors). One of these structures is a tiny, almond-shaped organ called the amygdala. Its name derives from the Latin word for ‘almond’, so there you go.

The amygdala plays an important role in the fear response. Get a wobble in your gut just before you give a speech? Amygdala. Have a spider in your bath and want to flee? Amygdala. See a sabre-tooth tiger galloping in your direction with drool flying from its gaping maw and really, really want to run away? Amygdala.

Although there are plenty of emotions that guide and shape our behaviour, fear is one of the most powerful. Going back to Ug and his problems (from Part 1 of this post), they were governed by fear.

But we aren’t cave-dwellers. Surely we are governed by higher sensibilities than eat-or-be-eaten? We developed music, the Internet, Angry Birds.

That’s true. We did. With the amazing neurological architecture of our pre-frontal cortex – that squirmy, grey mass you see being eaten in zombie films, which we also invented.

However, dismiss the power of the limbic system at your peril. It’s still there, deep within the brainy skulls of neuroscientists, economists, university professors and copywriters. And it’s still doing what it always did. Responding to stories, shaping our emotions and influencing our decisions.

Let’s take a modern-day product and see how the limbic system affects the way it’s consumed. A product Og and Ug would have had little use for: the pension.

Buying a pension should be a purely rational decision. Fine. Maybe it is. (It isn’t. It’s a weighing-up of competing feelings. If the fear of dying poor is stronger than the desire to spend all our money now, we buy a pension.) Once we have made the decision to buy a pension, we have to choose a particular pension. And here’s where the power of emotion and the limbic system is seen most clearly:

Imagine a competition between five pension providers. Four take the sensible view that what people are looking for is return on investment, portfolio performance, accrued interest and

When pressed, many marketeers will admit, even if grudgingly, that in certain sectors – cosmetics, perhaps, or luxury watches – decisions are driven by emotion. But they are adamant that for their products – accountancy, office supplies, water softeners – the buying decision is 100% based on reason. This is a convenient belief, since it allows them to merely describe things, which may, by the way, include the benefits of ownership. Here’s the thing:

ALL decisions are driven by emotion. This has been shown by neuroscientists like Professor Antonio Damasio, in whose book, The Feeling of What Happens, you can read the experimental and clinical evidence for this claim. We use information to validate our decisions. But the impulse comes from our emotions. Simply put, when we have to choose between two or more competing options, knowing one is better is important, but feeling it is better is critical.

After we have decided – in a split second – that one course of action is the right one, we then review and possibly even select the data that backs up our gut feeling. (Although, as we know, the seat of decision-making is neither the gut, not the heart, but the limbic system.)

So what happens if we accept that emotions drive decision-making? How does it affect our copywriting?

The answer is, not as much as you might think. Our planning stays the same. We have to figure out our reader’s point of pain, what rouses them from slumber at three in the morning. We have to figure out how our product or service solves that problem. And we have to understand the reasons why our customer might not want to buy from us.

But having done all that, the way we approach the sales process is quite different. Rather than simply listing benefits – save time, save money, enjoy peace of mind – we need to sink a hook, baited with emotion, deep into the prospect’s limbic system.

That calls for strategies quite different from the argument-driven, intellectually-framed copy that many of us were trained to write. Strategies that owe more to the arts of storytelling, rhetoric and drama than classical economics, journalism or marketing.

How to Write Great Copy

Why Copywriting is Still Relevant in the Age of Chatbots